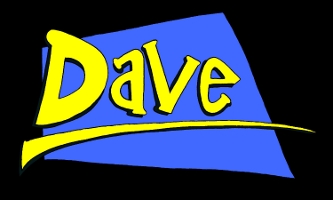 “Dave: The Series” is a webcomic about the life and adventures of the titular character of Dave, who is based quite closely on the comic’s author, Dave.

After over a decade’s worth of planning, writing, re-writing and production, “Dave: The Series” has been a long time coming. It started as the brainchild of Dave when he was still in school; he thought it might be rather jolly to make a cartoon series about himself and his friends. Back then, he envisioned the project as “Dave: The Animated Series”, which it has been known as ever since, until about a week before the first page of this comic was published, when it was shorted to just “Dave: The Series” (on account of the series no longer being animated!).

When originally planned, the series was intended to be a carbon copy of Dave’s life; an actual autobiographical  cartoon version of it. However, over time, Dave has sacrificed historical accuracy for entertainment value; certain events and characters have been tweaked to make them more interesting. So although loosely based on fact, the characters and scenarios in “Dave: The Series” should be classified as fictional, with just a hint of a basis in reality. To that end, certain names were changed to protect the innocent (and prevent lawsuits!)! Let us just say that “Dave: The Series” was inspired by real life and real people, but has developed beyond the inspiration into a whole new world of its own…

Hopefully everyone will enjoy reading “Dave” as much as the author has enjoyed living it!